The Mystical Art of Omkara Kriya Yoga – A Yogic Science designed to awaken the body of Light.

Guru Padmasambava – The “Lotus Born” Second Buddha who brought the Light Body teachings to Tibet in the 8th century.

Why is the release of Omkara Kriya Yoga significant today?

The general public first heard the term Kriya Yoga after Paramahamsa Yogananda published his best selling novel in 1946,
“The Autobiography of a Yogi”, detailing records of his own experiences with masters who, supposedly through ancient yogic arts, managed to not only reach enlightenment but transform their physical cells to pure Light. Through Yogananda’s passionate recount, we hear of masters, such as Mahavatar Babaji, who are able to live for thousands of years in the Himalayas without facing the stabs of death. We hear of yogis such as Lahiri Mahasaya, whose body became so subtle that he did not cast a shadow on the ground and was unable to be photographed. Though the public was initially skeptical of these divine possibilites, Yoganada’s ability to awaken divine experiences in anyone who followed his teachings began to draw a massive following. After a few decades, millions started to follow the path of self realization. It is common knowledge that the only book that Steve Jobs, the founder of Apple, had on his iPad and recommended everyone to read was in fact Yogananda’s “The Autobiography of a Yogi”. In 2014, Counterpoint films released “Awake: The Life of Yogananda”, a biography of Paramahamsa Yogananada that is still being shown  around the world in theaters, and is now available on DVD, digital rental and via Netflix streaming, spreading the knowledge of Kriya Yoga to a continuing widening audience.

Though, over the last 80 years, the public has been completely sincere in their desire to experience the divine as recorded in “Autobiography of a Yogi”, unfortunately the complete and authentic system of Kriya Yoga has never been available in its entirety. The public has never practiced what Mahavatar Babaji taught Lahiri Mahasaya in the secret himalayan caves to actualize immortality. In the last 80 years we have only received a watered down, incomplete form of the practice that only hinted at the true science, which has always been kept shrouded in secrecy.  Lack of knowledge, incomplete levels, and practices that needed Guru initiation to be effective has been tormenting all the thousands of sincere seekers that simply want to actualize their divine potential as Yogananda described back in 1946. Most received only levels one and two of the Kriya Yoga that Yogananda taught. Even these first and second levels of Kriya were simply  mechanical exercises that involved chanting to various centers in the body. Those who followed Hariharananda’s Kriya Yoga path also faced similar problems of having only the beginning levels and practicing mechanical exercises. Knowledge of higher forms and levels of Kriya Yoga, and knowledge of the actual process to awaken the cosmic power latent within the soul, the Light Body, has always been shrouded in confusion. No one really knew what it took to achieve the level of masters like Mahavatar Babaji and Lahiri Mahasaya. There has been a new Kriya that was created in the last ten years by Mahavatar Babaji labelled Atma Kriya Yoga. Though that practice has drawn a following, again out of the 5 levels, people are only allowed the first two levels which are again mechanical exercises.

What did Mahavatar Babaji teach over a thousands years ago? What were the meditations that were practiced prior to a hundred years ago? What is needed to awaken the Light Body? Were the meditations that immortal yogis practiced in the secret caves of the Himalayas, the same as what was available for people living in the world? Is what was told in “Autobiography of a Yogi” a myth, or was it really possible for everyone to actualize the Light Body, as long as they laid their hands on the right science? Until very recently there has been no real, satisfying answers to these questions that have been lying within the hearts of seekers for decades. Was anyone ever going to find out the real answers to these questions? The future of enlightenment for the everyday individual was very uncertain and shaky.

When I had the great blessings to become a part of a lineage that was over a thousand years old, I knew that the real keys to spirituality were close at hand.The  practices of the lineage were fiercely guarded by the head abbots of secret temples.   Master of the lineage taught me an ancient meditation from the Tang Dynasty that he said awakened  the Light Body in a flavor of celestial white energy. He said that in addition to this practice being heavily related to Hinduism and Buddhism,  masters in the past have used this meditation to attempt to achieve immortality. As soon as I began to practice the mediation I realized it was the authentic  secret Kriya Yoga system that was never released publicly and remained hidden. I knew that this Kriya Yoga method was exactly what people had been searching for since the time of Yogananda. The Master said this was an oral tradition and never ever written down by the monks. One could only learn methods such as these if they were born in the temple tradition of China and Tibet. Even in the “Autobiography of a Yogi”, Yogananda told of a saint by the name of Swami Vishudananda, who after spending 12 years in a  mystical hidden away temple in the mountain ranges of Tibet, came back to India with supernormal powers, having the ability to materialize objects, emit divine fragrances, levitate, and glow with Light. After practicing this method for sometime, and experiencing effects that  I had never previously imagined, I realized this practice could do great service to the world. This desire to experience the great spiritual Light that I was finally experiencing with Omkara Kriya Yoga method, was deep within the heart of not just me, but everyone who sincerely longed for enlightenment. If the Omkara Kriya Yoga was released more publicly, this desire could finally be fulfilled.  For the first time in history, there is now a chance for everyone to discover and benefit from the secret yogic sciences.

Omkara Kriya Yoga is a seated yogic meditation that  includes 18 secret levels which systematically  and scientifically establishes the practitioner in Cosmic Awareness and cultivates the Light Body. Each posture in the Omkara Kriya Yoga  meditation awakens a different circuit of light and energy though the body. The different mudras concentrate the light in different energetic centers in the body, and awaken specific points in the brain. In the past, masters used to release only one level at a time to truly test disciples and passed on the practice to only rare deserving candidates. Unfortunately this method made it almost impossible for the disciples to progress no matter how much they practiced. Knowing a fraction of a password will never allow you access.

The Science of Omkara Kriya Yoga and the Light Body

Omkara Kriya Yoga specifically focuses on the awakening of the cosmic light in the three Dantians. Our energetic system mainly consists of the seven chakras, from the root to the crown, and the three Dantians; the Lower Dantian, Middle Dantian, and Upper Dantian. The chakras can be likened to energy activation points and the dantians can be likened to energy storage centers.

Relationship between the Upper Dantian and the Middle Dantian:

For the Light Body to be attained a secret channel must awaken between the crown and the spiritual heart lotus. There is a specific name for this channel in the Tibetan tradition. As the currents of light and energy travel between the brain and Heart, the primordial light of your Soul starts to awaken in the Heart. This is the beginning of the Light Body.

This knowledge of the steps required to awake the Light Body has never been available before. Attainment within all three Dantians is required for the Light Body to be activated. The 9 palaces must be awakened fully and the secret channel between the crown and the heart must also awaken. The True light then begins to open up in the lotus of the Heart. It takes roughly five years  of daily practice in Omkara Kriya Yoga for this to happen.

During the practice of Omkara Kriya Yoga you will directly experience this process happen inside of you. 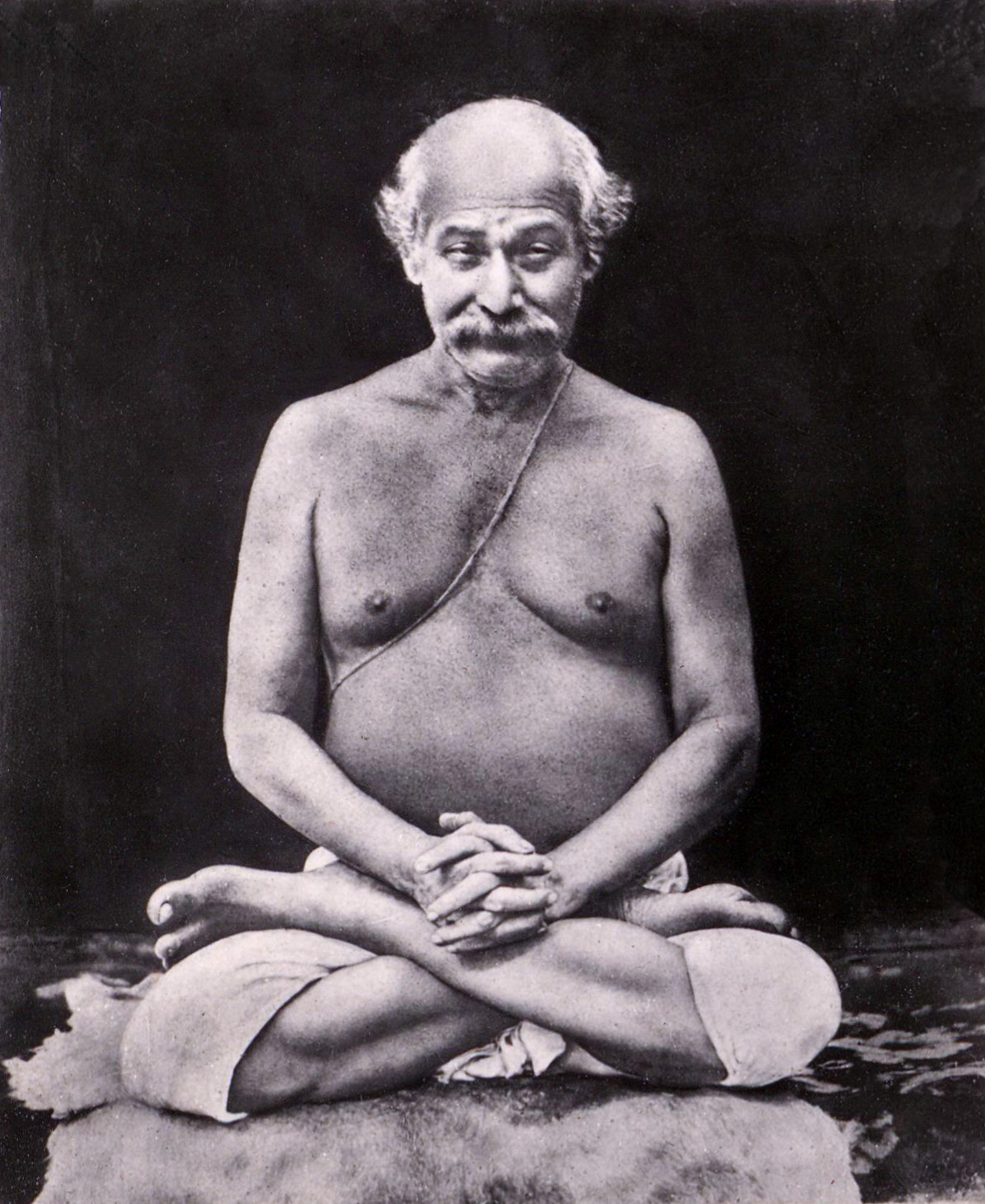 Lahiri Mahasya – The Kriya Yoga Master who received the Kriya Yoga system from Mahavatar Babaji in the 19th century.